I’ll admit, I have quite the obsession with seafood… Especially as of lately. I think it’s because I ate so much of the locally caught fish in Australia, that I became accustomed to it! Obviously moving back to the Midwest, … END_OF_DOCUMENT_TOKEN_TO_BE_REPLACED

Ok, I admit it…I have become quite the foodie lately. I have had a lot more free time on my hands since I graduated college, and I have tried numerous amounts of recipes and become quite adventurous with my taste … END_OF_DOCUMENT_TOKEN_TO_BE_REPLACED

One of my favorite things to do is buy fresh mint from the farmer’s market or the grocery store and mix it in my water for a refreshing thirst quencher. When I lived in Italy, I stayed with an Italian … END_OF_DOCUMENT_TOKEN_TO_BE_REPLACED

A friend of mine blogs for her career while living in England and she constantly posts pictures of her overnight oats on her Instagram and blog. I had never heard of them until I saw her post it months ago, and I decided to finally try it myself. I probably should have tried her recipe that she posted on her blog Love and London, however, I just Googled a random simple recipe that included ingredients I already had.

The recipe which I found online, was a Strawberry-Coconut Overnight Oats recipe, and I changed up a few ingredients. Instead of using Almond Milk, I used Soy Milk and I also didn’t add maple syrup, which probably should have been added. I also had read several other recipes which had greek yogurt in it, so I added that as well to this recipe. 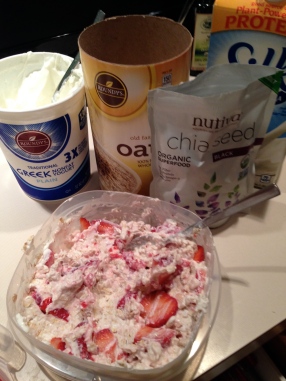 I doubled the recipe on most ingredients, and added more strawberries. When I ate it in the morning, I didn’t think it had as much flavor as I had hoped it would. I would recommend using a flavored greek yogurt if you want more flavor, as this was pretty bland. Many people also think you are supposed to heat up the overnight oats, but you don’t cook anything!

Mix it all together, and stick in the fridge overnight. Again, I would recommend adding more fruit, a flavored greek yogurt, or nuts. Or, try one of my friend’s recipes such as the one listed on her blog Love and London.

Everyone loves watermelon on a warm summer day, but I know I love watermelon in the fall too! Some people cut it into triangles, others cut them in cubes, either way, cutting up watermelon can be a mess! I recently saw a video shared on Facebook that showed a man sharing his tutorial on how to cut watermelon in an easy, and fast way. After I purchased a watermelon from the local farmer’s market last wee, I decided to try his technique for myself! 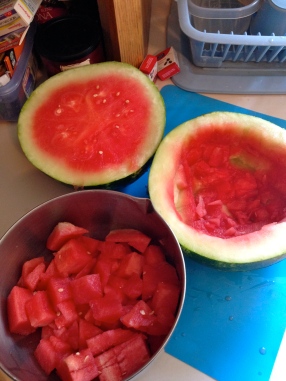 Have you ever tried to make Kale chips before? Well, I have attempted to several times, and every time I make them, I get a different result. I think one reason is because I have baked my kale chips in 4 different … END_OF_DOCUMENT_TOKEN_TO_BE_REPLACED

I think after I spent a semester abroad in Italy, I became hooked on farmer’s markets and buying locally grown food. I made it a weekly habit to go to the Mercato Centrale in Florence to buy fresh produce and … END_OF_DOCUMENT_TOKEN_TO_BE_REPLACED

Looking for a delicious cookie recipe that you can enjoy without all the guilt? Look no further, this recipe is AMAZING! When I am invited to someone’s house for a party or special event, I always bring some type of food dish to share. Typically, my go to is fresh veggies and a homemade greek yogurt dip, but I wanted to make something new this time for my friend’s going away party.

I searched all over Pinterest for various recipes, and wanted to find a dessert that wasn’t too complicated to make, truly was healthier, and didn’t require me to buy tons of ingredients that I didn’t already have in my pantry. Many recipes claim to be “skinny” and “healthy”, however, the majority of them really aren’t anything different. I found one recipe of cookies that called for every same ingredient as a normal batch of cookies, except you added greek yogurt….Yeah, not healthier at all. It’s the added sugar, eggs, butter, milk, etc. that make the calorie and fat count rise. Plus, greek yogurt is healthier than regular yogurt ONLY if there is minimal sugar. Make sure you look at the labels! 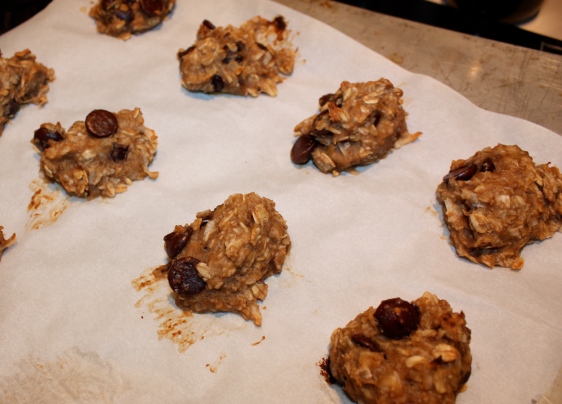 I found this recipe on Pinterest, originally posted on the Skinny Fork Blog. When I made these cookies, I doubled the recipe and changed up a few of the ingredients.

I was worried that these cookies wouldn’t be too popular at the party, but little did I know, they were a HUGE hit!

I personally LOVE fresh fruit, so this recipe was a definite must for me! We have two apple trees in my backyard, and I wanted to find a yummy recipe that was not loaded with butter, carbs and unhealthy ingredients. … END_OF_DOCUMENT_TOKEN_TO_BE_REPLACED

My friend (who I blogged about in a previous post) who has a fitness blog periodically posts healthy recipes. She posted this yummy, simple, healthy recipe and I LOVE IT! I ran out of egg whites, so I used regular eggs. Instead of the veggies she listed, I used mushrooms, spinach, & tomatoes. I can’t wait to just get out of bed, pop these in the microwave and leave for class!